Florida Keys Electric Co-op was formed in 1940 as a rural electric cooperative. As a cooperative, FKEC is owned by the customers it serves. Having a meter installed in one’s name is all it takes to become a member-owner. A nine-member Board of Directors, elected by the member-owners of the cooperative, oversees operations.

In the 1930’s, there were only a few fishing camps and small communities scattered throughout the Keys. The generating plants that existed at that time were unreliable. Power was supplied for only a few hours a day, and even that was subject to frequent shortages and outages.

FKEC was formed to bring reliable, centralized electric service to an area of the Keys extending from the Dade/Monroe County line to the Seven Mile Bridge at the south end of Marathon. During FKEC’s early years, power was supplied to the upper Keys by a small generating plant in Tavernier. The Marathon area was supplied by two 50 kilowatt portable generating units. By the mid-1940s, a line had been extended from the upper Keys to Marathon and the Tavernier plant supplied all needed power.

By the early 1950’s, power demands exceeded the capacity of the Tavernier plant. A distribution line was built to the mainland connecting Tavernier with the City of Homestead’s plant. The Tavernier generating plant was retired. The Marathon generating plant was constructed in the early 1950s and by the mid-1950s was producing power from two 1,000 kilowatt generators. By the late 1950’s, a 69,000 volt transmission line was built, connecting FKEC to Florida Power and Light (FPL). FKEC’s arrangement with the City of Homestead was terminated and FKEC began purchasing wholesale power from FPL.

Read more about our history and see additional photos in The History of Florida Keys Electric Co-Op (PDF) book.

In the early 1900s, many years after the rest of Florida had central electric service, the Upper and Middle Keys still had none. In the 1930s, a few privately-owned generating plants provided a limited number of homes and businesses with electricity for a few hours a day, but even those hours were unreliable.

It was the combination of two major events in 1935, plus the determination of a handful of local residents, that ultimately advanced the delivery of electric service to our service territory.

The first was the creation of the Rural Electrification Administration (REA) by President Franklin Roosevelt, which offered federally financed loans for the construction of electric distribution systems in rural communities.

The second event was the 1935 hurricane, which wiped out the railroad. The loss of the railroad prompted the development of the Overseas Highway, which in turn created easier access to our islands as well as a greater demand for electricity.

Despite a growing demand for electricity many Keys residents were still skeptical of joining an organization that demanded a $5 membership fee, paid in advance. In fact, it was difficult to obtain the 300 memberships required by the REA to start the Co-op. Luckily, the vision and determination of the founding leaders could not be discouraged. In fact, enthusiasts like Allen Parrish of Marathon bought 20 memberships himself to meet the quota.

On January 22, 1940, the Florida Keys Electric Cooperative Association, Inc. was certified by the Florida Secretary of State with an office address of the “Marathon Grocery, Marathon, Florida.”

Four days later FKEC had its first board meeting and John A. Russell of Islamorada was elected chairperson.

By 1943, FKEC operated a small plant with three generators in Tavernier and had two portable units in Marathon. 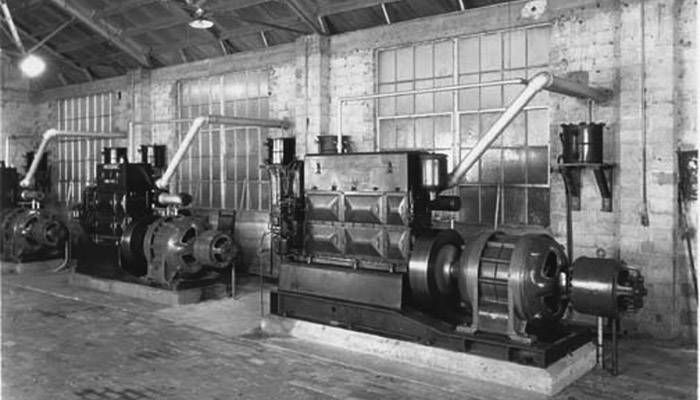 In 1947, FKEC extended electric service up North Key Largo to the Angler’s Club and to houses in between. In 1951, Coral Shores School opened for grades K-12, and FKEC had to keep expanding to meet the greater demand for power.

In 1957, FKEC constructed a 69,000-volt transmission line to deliver power from the mainland. The following year FKEC began purchasing electricity wholesale from FP&L, as it does today. At this time the line did not extend to Marathon. There the generating plant was expanded.

By 1960, the Marathon facility could provide 11,000-kw from its plant. It operated faithfully through Hurricane Donna which destroyed much of the outside facilities; however, the diesel generators kept running as each portion of poles, transformers and lines were restored.

The next major grid expansion was in 1981 when transmission lines were installed between Tavernier and Marathon. This combined the two separate facilities and Marathon could use the purchased power from FP&L. After nearly four decades of constant operation, the diesels at Marathon could shut down and be reserved for emergencies.

We have come a long way and look forward to serving you with the same determination and progressive vision as our founders.

Today FKEC proudly serves nearly 33,000 accounts from the Monroe-Dade County line to the Seven Mile Bridge. In our service territory we currently operate six substations, two office facilities, and maintain over 800-miles of power lines. As a distribution Cooperative, FKEC also maintains a 138,000 kilo-volt transmission line, which brings power from the mainland to the Florida Keys. FKEC purchases 100% of its energy needs from Florida Power & Light (FPL). Generators in Marathon and FKEC’s two solar arrays also contribute to our power supply.